I’m off to Hawaii tomorrow. You know what that means. It’s time to start packing. Well, not exactly yet. I still have the rest of the day. For now, there are too many other things to do, like begin my swimsuit exercise regimen.

Even with the 1000 stomach crunches, I’m still going to look a little bloated when I hit the beach on Monday. That takes some of the pressure off to get to the whole swimsuit exercise regimen right away. The other thing that takes the pressure off is my age because even with 1000 crunches, I’ll still have spider veins and dry elbows.

Packing, like exercise, is rarely an easy task to get to, which is probably why so many people put it off as long as they can. Some people even have other people pack for them, like children and Paula Abdul.

I can understand why children need help. Imagine if you said to your 6-year-old son, “We’re leaving for Hawaii tomorrow. Don’t forget to pack.”

He would hardly forget. In fact, he’d probably finish sooner than you if it meant not having to clean his room. Then he’d get to Hawaii, unzip his bag and the only thing in it would be his blankie and his goldfish, Nemo, which he cleverly packed in a Ziploc bag full of water.

“What on earth?” you’d say, “Why did you pack the goldfish?”

Gee, kids are cute. Unfortunately, they are also crazy-making as you have just arrived in Hawaii and now the first thing you have to do is drive to the mall to buy your kid some underwear.

That thing about Paula Abdul having someone pack for her, I saw that on her Bravo TV show “Hey Paula” that aired for a quick minute about a decade ago. I remember it because it never occurred to me that you would have someone else pack for you.

“What do you want?” you can say, as you tap your bloated Bloody Mary-and-salted-peanuts belly. “I’m 50.”

Or you can jump up and down and scream, “Fire!”

Either way, no one will notice you because two 18-year-olds sun bunnies are playing Frisbee nearby.

I suppose I could pick up some kind of natural diuretic at the drug store to deal with the bloating, but I might run into someone I know who will stare at my purchase and wonder if I’ve developed an eating disorder.

Or I could go the mall and look for a new super-strength shape-slimming bathing suit that not only flattens my belly but also constricts my breathing.

But I still have to pack and do my 1000 crunches. So the question is, as it always is when any of us is packing: What do I really need?

I know! A tan. If I hurry, I can get in three sessions before dinner. 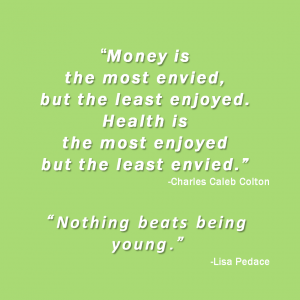 Be kind
I say to myself
when I walk out the door
if I remember.
Do unto others
what goes around comes around
it takes eighty-six muscles to frown
and only two to smile.
Be generous
there are children in Africa
China
America
with less
besides you can’t take it with you.
I glare at the idiot in front of me with more
than ten items
and wonder if he’s ever heard of the Golden Rule.
How golden it would be
to whack him on the head
with my lone baguette.
Maybe a string around my finger.

A Motivational Mint for Today 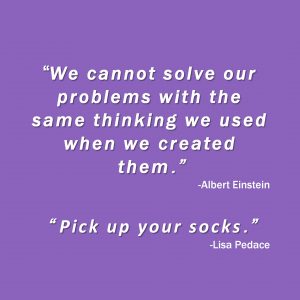 Peanut, all dressed up.
I’m still going to eat you.
Top hat, anyone?